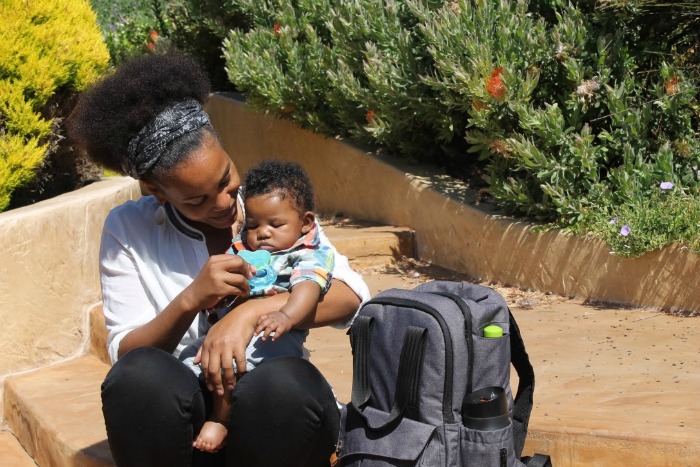 I’m used to doing things on my own. I started my first job when I was 12 years old, put myself through college, and was a single mom for a few years. There isn’t a problem in my world that I believe doesn’t have a solution. That being said, the first time I traveled alone with my infant son, I found my kryptonite. Jamie and I went from San Francisco to Orlando on a red-eye when he was 2 months old, and it nearly broke me.

Sure, people travel with infants all the time. We see the photos on social media of jetsetting families with a wee one strapped to their chest. Mama looks well-rested, well-traveled, and well…they ain’t me.

Things started off well. I took time to plan for our trip well in advanced. I surveyed friends about the best stroller to bring with me, and planned out his outfits. I made a list so I wouldn’t forget things like his medicine, plenty of diapers, and gripe water. I did everything I needed to do to make sure I was set up for success.

Then the actual day for travel arrived, and things started to fall apart pretty quickly. First, the minor wrist pain that I had been experiencing (Google “postpartum tendinitis”) turned into major wrist pain, and it became clear that I’d have to rethink my packing plan. With only one strong hand, I had to leave my stroller and rely solely on wearing him.

Usually my son loves to be held, but while we were waiting in the security line, he decided that the carrier was offensive and started howling and trying to escape. I took him out and let him look around and he was fine. Of course, then I had to try to go through security with a diaper bookbag, a 15 lb. baby, a bulky baby carrier hanging off of me, and one bad wrist.

I still wasn’t shook. Things could get a lot worse. As I was walking to our gate after finally getting through security, I heard the loud sound of thunder from my son’s diaper.

Knowing my baby and his blowouts, I calculated that I had about 1.5 minutes before the situation got really ugly. I was grateful to see a family bathroom really close and made a beeline to it. A sign on the door directed me to a courtesy phone where I could dial and get the code for the bathroom. I went to the phone, lifted the receiver and faintly heard a voice on the other line. The airport and my crying baby were so loud that I had to call back three times before I finally heard the code correctly.

That crisis averted, I looked at my boarding pass and saw that I was in the aisle seat. While that might not seem like a big deal, trying to wait for my seat mates to board while keeping my sweaty hot infant occupied was a lot of work. By the time they arrived, I was sweating through my shirt.

It wasn’t all bad, though. My son didn’t seem to have issues with his ears popping during takeoff or landing, so I was happy about that. He also slept for about 90% of the flight. I was really grateful for that until I realized that letting him sleep without waking him to sleep for 4 hours meant that my breasts were engorged and hard as rocks. As I tried to navigate boob bricks into my son’s mouth while he was still sleeping without exposing myself to the man sitting in the middle seat next to me, I had an epiphany—I was handling it. The entire trip. It was happening, and I was managing things like a champ.

That boosted my self-esteem and really changed the way that I looked at the rest of the trip. I realized that I was in control. Our travel would go as well as I reacted to it.

Babies have blowouts. Deal with it.

Babies cry when they’re hot. Deal with it.

I changed my attitude about the trip, and things started to look up.

When we landed, I hung out in the airport for an hour drinking coffee while my son slept in the carrier on my chest. I took a few moments to myself to breathe and relax. The next month we took a 5 hour flight to Hawaii, and since then we’ve flown to across the country to Atlanta and mastered several roadtrips.

The first time you travel with your baby alone, it will be overwhelming but you’ll get through it. Don’t worry about whether or not your baby is offending people with their crying, or if you’re taking too long to get out the way. Breathe and handle it. You got this, Mama. If I can do it, anyone can!

How to Dispose of Diapers (The Right Way!)

Can You Safely Take Antibiotics While Pregnant or Breastfeeding, Or…

What Should My Husband Get Me For Christmas?