Food And Your PregnancyPregnancy

The Possible Benefits of Eating Dates During Your Pregnancy 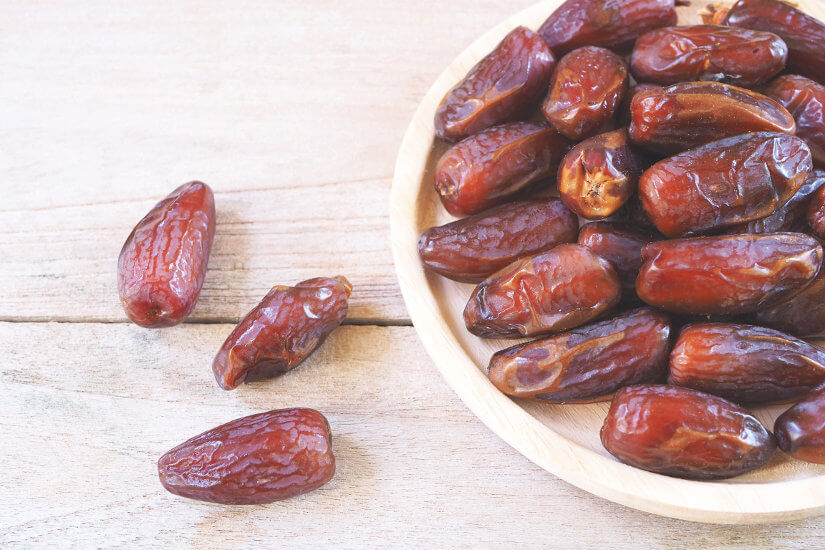 Apart from being a “hot” food, what other secrets is the delicious date hiding?

Why was this relevant anyways? Well, I guess eating too much of a hot food at once could give you a nosebleed, or may also affect your cycle.

Dates are dear to my heart because they are a traditional favorite during the fasting month of Ramadan, and the fresh variety is my preferred choice, although those are much harder to come by than the abundant offerings of dried dates.

The sweetness of a date, paired with the sour, creaminess of Greek yogurt are perfect for a rumbling tummy at the end of a fasting day.

While pregnant I heard a lot of advice about what to eat and what not to eat. Dates came up as a winner. But is there any truth to the claim that eating dates towards the end of your pregnancy can ease labor and make for an easier birth?

A small study conducted between 2007 and 2008 (carried out at the Jordan University of Science and Technology and published on PubMed) indicates that yes, dates do help with both labor and birth.

What exactly are the benefits? Let’s dive in.

The study’s aim was to determine the effects of eating dates during pregnancy, on labor and delivery. Almost 70 women were required to eat 6 dates a day during the last 4 weeks of their pregnancies. Results from a control group of 45 women, who ate no dates, were also measured.

The study found that eating dates during the last month of pregnancy had at least the following beneficial effects:

Therefore eating dates during the last few weeks of pregnancy could ensure an easier labor and increases the odds that you’ll avoid certain forms of medical intervention during labor as well.

The benefits of eating dates are remarkable considering how easy it is to just add a few dates to your plate every day.

Remember, though, you can have too much of a good thing, so don’t go overboard. Stick to a reasonable number of dates, and consult with your doctor if you have any dietary concerns. Dates are sweet and contain natural sugar, so take that into account when considering your daily sugar intake.

Dates as a traditional food for laboring mothers.

In Islamic history, it is believed that Maryam (blessings be upon her), the mother of Eesa (peace be upon him) was provided with dates during her labor and after delivery. If you’re wondering who Maryam and Eesa are, in Christian tradition they are known as Mary and Jesus. If it was good enough for them, it should be good enough for me!

And here’s another side note: I was also given a flower of Maryam to use during birth – a dry, brittle and grayish plant, which slowly begins to bloom and soften as the laboring mother dilates, after it is placed in water in the birthing room. These plants grow in the Sinai desert, the Arabian Peninsula and the deserts of North Africa.

The story behind these plants, which I shall leave for another day, is fascinating.

Apart from the benefits of dates during labor and delivery, dates also have nutritional benefits that any lady can take advantage of.

Dates are incredibly nutritious, and the fact that dried dates are so easy to store makes it a convenient and handy snack, not to mention scrumptiously sweet.

Just 100 grams of dates contain a healthy dose of the following vitamins and minerals:

After birth, I even used a softened, chewed date to perform an Islamic tradition known as “tahneek”, which involves saying a prayer and giving your new baby a dab of sweetness on his palate.

A study by the University of Auckland has shown that giving babies a “sugar gel” shortly after birth is beneficial in protecting against brain damage and hypoglycemia. By chewing a small piece of a dried date and rubbing it onto my baby’s palate and tongue, we gave him a sweet and healthy start to his life.

Dates may help to ease labor and speed delivery. Adding a few dates to your diet in the last few weeks of pregnancy may make the whole birthing process easier. Remember to check with your doctor if you have any concerns, and don’t overdo the date-eating because they contain sugar.

There are so many varieties of fresh and dried dates, consider packing some into your hospital bag, for a quick and healthy boost of energy during labor.

Pineapple: Can You Safely Eat This Awesome Fruit When You’re Pregnant or Breastfeeding?

Mom FAQ: All About Nursery Humidifiers

2 Wonderful Belly Bands & Maternity Belts To Keep Your Pants Up

This is why all moms need to keep a journal