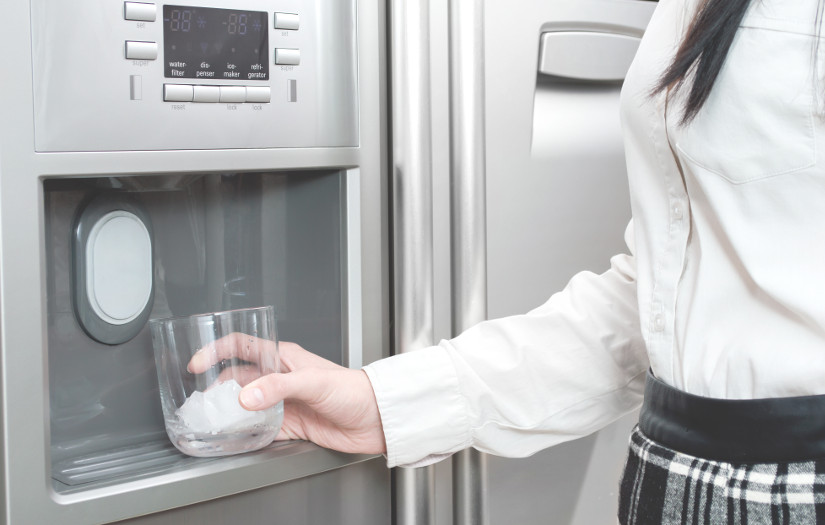 Chocolate, spicy foods, ANYTHING from the carbohydrates food groups… these are some of the pretty common cravings experienced by pregnant women. (Me included, especially chocolate!)

But if you find yourself presented with a chilled glass of lemonade, only to scoop out the ice cubes and start crunching, then you’re not alone!

Why do so many of us crave ice when we’re pregnant?

For me, the reason I craved ice was morning sickness.

Or perhaps we should call it “anytime if feels like it” sickness!  Or “all-the-live-long-day sickness?”

Around 75% of women are said to struggle with this during the first trimester.  It’s thought that pregnancy-related hormones are the cause of it and studies have shown that morning sickness may be a sign of a stronger, healthier developing baby, so it’s not all bad news!

More often than not, pregnant women suffering from morning sickness (and I did, badly!) struggle to stomach food and keep it down! But all the advice says not to panic, as long as you’re keeping up with your intake of fluids.

Well, I was in the other boat. The one where all I wanted to do was eat! And yet give me a glass of water and it’d send me running for the bathroom.

No matter how slowly or little I sipped, my body did not want to know, so ice (and bizarrely, watermelon!) were my friends. They helped me get my H20 fix which was so important for me and my baby.

Ice is easily digestible AND doesn’t have a distinct odor, like so many foods which can cause nausea. Many women feel that crunching ice helps them if they feel queasy early on in their pregnancy.

Another joy which mother nature bestows on us during pregnancy!

Also known as acid indigestion or acid reflux, heartburn can be especially uncomfortable towards the end of your pregnancy, although it can strike at any time.

The reason that pregnant women are more likely to suffer this than before they were pregnant, is due to the hormone progesterone. This is produced by the placenta and relaxes the smooth muscles of the uterus.

A side effect is that the valve between the esophagus and the stomach is also relaxed. This means that stomach acids can more easily travel back up, creating real discomfort.

Although there are certain medicines which you can take to combat heartburn during pregnancy (you can find safe ones here) ice is a more natural way to try to combat this unpleasant feeling.

Your metabolic rate also increases in the third trimester, which can also make you feel the heat! Add to this the extra bonus of a summer pregnancy (like mine!) and the heat is ramped up even more!

Unsurprisingly, ice is one way to combat this feeling. It’s really important to stay hydrated- for both you and baby. Try to stick to healthy drinks like iced water and make sure you’re not combining your ice with too many sugary or fizzy drinks.

Other ways to stay cool are:

This is really one to watch out for.

Although the things we have already mentioned are relatively harmless, iron crunching could be a sign of a potentially more serious mineral deficiency.

A strong and repeated craving for munching on ice cubes can be a form of pica. This is the desire to eat non-food items with no nutritional value, such as clay, chalk, soil, flaked paint, glue, sand, and plaster, to name a few.

(It’s actually named after magpies, which will eat pretty much anything!)

Luckily, ice is obviously not dangerous like the other items in this list! However, pica is an eating disorder and can lead to serious health problems.

The likelihood is that your ice-crunching won’t be linked to pica, but since some studies have linked this munching to iron deficiency, you should always mention it to your doctor or midwife if you experience this craving.

If you are diagnosed with an iron deficiency (also called anemia) in pregnancy, your doctor may recommend a B12 vitamin supplement, but please remember never to self-diagnose or self-medicate. You may be advised to eat iron-rich foods such as meat, eggs and dairy products (WebMD)

Should I eat ice to cut calories when I’m pregnant?

Over-eating could simply cause excessive weight gain leading to health problems and possibly a difficult pregnancy.

So can ice be used as a calorie-cutter? No! Pregnancy is not the time to go on crash diets or start drastically cutting calories unless advised by your doctor.

We have some guidance on how to lose weight safely if you have been given this instruction by a medical professional.

Is it safe to eat that much ice?

As long as it’s not a sign of an iron deficiency, you might think there’s nothing wrong with crunching on ice cubes.

You might be thinking: It’s just frozen water, right? Well, not in excess. Too much ice-munching can damage the enamel on our teeth, which could make them sensitive or expose them to decay. You could try letting the ice melt on your tongue a bit, or even try munching on a carrot as a crunching alternative.

So, there we have it! If you’re craving ice then you’re certainly not alone.

As long as you’ve ruled out an iron deficiency, then a little ice-crunching in moderation won’t hurt!

No Appetite During Your Pregnancy? These Are Possible Reasons Why

How to Baby-Proof Doors

You might have HSDD and not even know it

The Danger of Baby Sleep Positioners

I felt compassion for a stranger, but not my own mother