How To Get The Funky Smells Out of a Diaper Pail 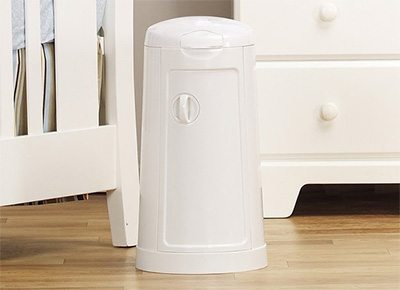 Inevitably, after using a diaper pail for a while, it’s going to start to reek if you’re not taking preventative measures!

What’s worse is that after a while, the smell seems to permeate the diaper pail itself, and it stinks even when it’s empty. You probably thought that buying a diaper pail was going to be the end of your diaper smell worries, but not necessarily so!

You won’t be the first parent to gag their way to taking out the weekly diapers.

If you want to get the smell out of your diaper pail, there are some easy things you can try. There are even some things you can do to make sure the pail doesn’t smell in the first place.

If you want your diaper pail to not smell like a sewer, the best thing you can do is be proactive and stop it from getting that way in the first place. Here are some things you can do.

Too Late, It’s Already Stinking: Getting the Smell Out

If your diaper pail already reeks, it’s time to take some drastic measures!

You’ll want to empty the pail out and take it outside. You can use chemical cleaners on the pail, but you have to be very careful. If it’s a plastic pail, some harsh chemicals can erode the plastic, so if you’re going to use them, try it out on a very small section first.

You can try the chlorine bleach method! Take it outside with a large bag and a bottle of chlorine. Douse the pail in chlorine and seal it up inside the bag. Let it sit outside for a few days, and with any luck, it will have gotten rid of a lot of the smell.

If you do this, make sure you open it up outside and rinse it out thoroughly with water before you bring it inside. Also be careful not to get the bleach on any grass or plants, because it’s sure to kill them.

Vinegar also works, but you need a lot of it, so this isn’t going to be the cheapest option.

The Danger of Baby Sleep Positioners

Mom FAQ: All About Nursery Humidifiers

How to Dispose of Diapers (The Right Way!)

Mom FAQ: Is it Safe to Reuse a Crib Mattress?

How To Properly Strip Cloth Diapers (And Get The Stink Out!)

Why Your Ears Are Ringing (The Facts on Tinnitus During Pregnancy)

Teething Rash 101: How to Deal With One The Easiest Way

I tried toothpaste with charcoal. Here’s what it’s like.